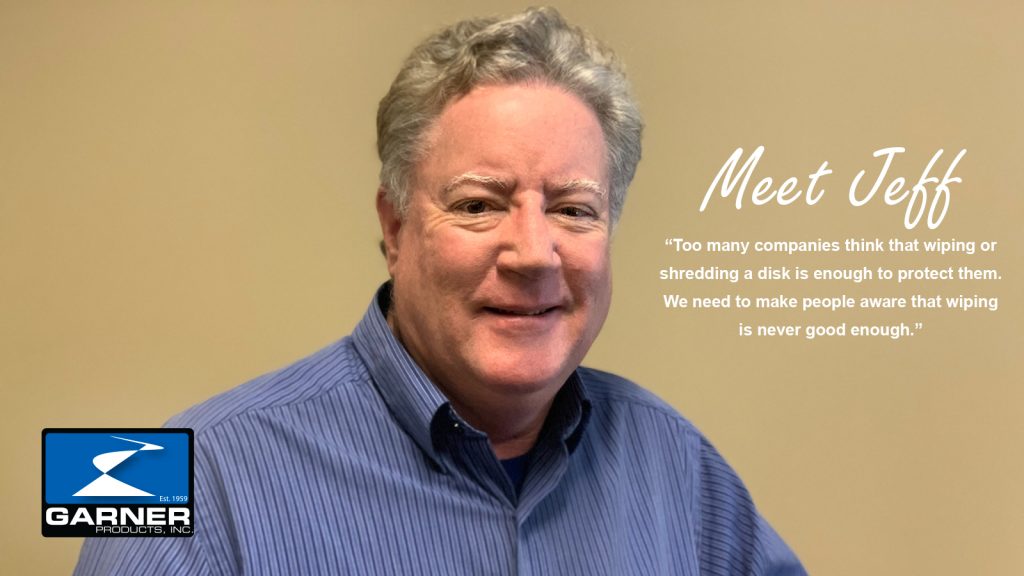 Garner Products is pleased to welcome Jeff Maloney as our new account manager. Jeff brings extensive marketing and sales experience to Garner, especially in the area of channel development.

At Garner, Jeff will be focused on building brand awareness, increasing product line interest, and working to deepen relationships with Garner’s global network of dealers and distributors.

Regulatory compliance and government standards are areas where Jeff sees the biggest need.

Jeff knows well the problems that poor end-of-life data-management can create. He watched a large Silicon Valley tech company with 8,000 laptops and thousands of servers routinely toss old hard drives into a big open bin. They would wait three or four months until the bin was overflowing and then call the shredding company to come take care of the mountain of used drives, full of confidential data.

The company was later involved in a lawsuit when several engineers left the company for a competitor and may have taken old hard drives with proprietary data with them. The company didn’t know exactly what was taken Jeff said.

That lawsuit highlighted the need for chain of custody of data from acquisition to end-of-life. Best practice for chain for custody is to bring the destruction equipment to the media; Degauss and destroy at the location of the media and verify the destruction process.

Jeff is excited to educate people about proper data disposal in his new role. “I read a recent survey in which 65% of participants said that wiping drives was fine. That’s a problem for them. If I can get that number down to 15% I’d be ecstatic.”

Wiping or overwriting an existing drive is an urban security myth that has been debunked by the DoD. Today, the DoD and other organizations concerned with Top-Secret data disposal rely on the NSA/CSS policy manual 9-12 storage device sanitization and destruction manual. The manual recommends degaussing, disintegration, or incineration as the only acceptable methods of magnetic hard drive sanitation.

When he’s not working, you can find Jeff enjoying life at the ocean with his two sons. He’s an accomplished wakeboarder, free diver and competitive spear fisherman.